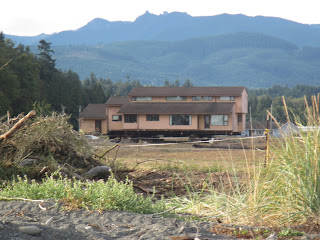 A home on the Strait of Juan de Fuca still on blocks after being moved back from the beach.  Photo taken 16 September 2017

In my line of work we spend a good bit of time worrying about the future of existing coastal development, and how society will respond to the pressures of climate impacts like sea level rise. If you are a pessimist you sort of see the future being made of walls along the coast that keep the rising sea away from homes and infrastructure. Its not hard to see the point of these pessimists. Indeed there are entire countries that are built on the principle of defending land against the ocean (though that approach is changing). 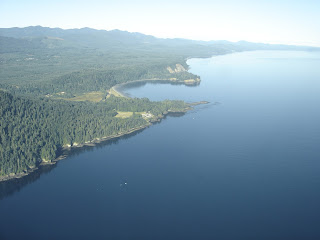 The costs of defending Washington's extraordinary coastline would be huge

The environmental costs, not to mention the dollar sums, of the defense approach to coastal hazards can be huge, and as a result my impression has always been that other alternatives may be feasible, and even preferable, here in Washington State. But guide stars for other approaches have been few and far between. Over the last year, though, I had the very special opportunity to work with a family trying to protect their waterfront home from chronic erosion and flooding. The day that I visited they were still recovering from a few harsh storm years that destroyed parts of their existing rip-rap armoring, and drove debris right up to their home: 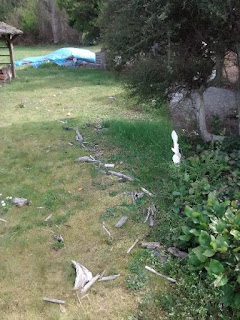 When I first interacted with them the family was considering some upgraded armoring - the defense approach. The costs, though, were huge for the design and construction of an upgraded defensive structure to protect their home, and I emphasized to them that no defensive structure is permanent...they all require maintenance. We then talked through other options, including moving their home out of harms way. Notably in this case this option appeared to be cheaper than defense, provided a longer-term solution AND would provide easier access to the beach (impaired at the time by the rip-rap, as seen below in a photo from 2016 looking up the beach): 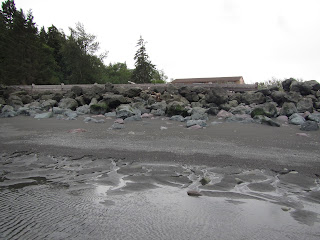 I was impressed by the family's decision-making process, and was inspired by their decision to move their home and remove their existing armoring. Astonishingly, once the decision was made the process happened quickly - the home was moved and the rip-rap removed by August of this year. The home is now out of harm's way, the beach is in better condition from an ecological and aesthetic standpoint...at this stage it seems to me like the optimal decision was made in this case.  Hopefully there will be an opportunity in the future to get a better sense from those involved regarding the relative costs and benefits of the chosen approach. 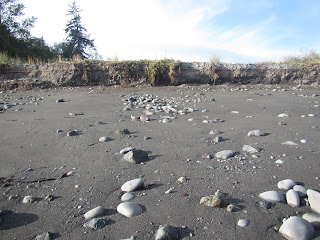 The view on 16 September 2017 from nearly the same point as the photo above.  A low scarp is all that remains of the formerly defensive rip-rap structure

In my book, though, this is real resilience at work. The Friends of the San Juans recently put together a little video telling a similar story from Orcas Island:

There are lots of things that came together in both of these cases. Notably the families' had both the means and the space to move their home. But in my mind that doesn't take away from how big these decisions are, or what they mean for our future. We often default to defense, but careful cost-benefit analysis isn't always done. Where it is, I see more and more occasions in which defense emerges as a less-than-ideal option.
Posted by Ian Miller at 4:50 PM